Integrating the jSparrow Maven plugin into a build process has the advantage of automatically applying selected jSparrow rules in an already automated process. The configuration is highly customizable and depends very much on the environment. Here it will be described how Jenkins builds are able to trigger jSparrow Maven plugin builds, depending on the Git branch of the commit. In this example, all builds on a feature branch will trigger jSparrow.

This description assumes that the following components are available and correctly setup.

A jSparrow build requires a license key and a config file (jsparrow.yml) to be present. Both can be kept securely within Jenkins and then referenced by the pipeline.

The jSparrow license key can be provided using the -Dlicense=<license-key> parameter, as described in the Plugin Goals. However, it might not be desirable to provide the key in plain text.
With the help of Jenkins "secret text" credentials, it is possible to never have the license key appear in the pipeline. Even in log statements the "secret text" will only appear as asterisks.

Jenkins lets users add credentials either globally, or build pipeline specific. For one pipeline, there is no practical difference between one or the other.

Customization about which rules to apply or which resources to skip are done in a config file (jsparrow.yml), as described in detail in Plugin Configuration.

By default, this configuration file is expected to reside in the project's root directory. Alternatively, there is the option to fully manage the jSparrow configuration in Jenkins. This might have the following advantages:

The config file can be added as follows:

In this example, a declarative Multibranch Pipeline will be configured to run the jSparrow Maven plugin on feature branches. In Gitflow, a feature branch should only be merged into develop (and master) after being reviewed in a pull request.

Here, the necessary pipeline file will be described one part at a time. Click on Jenkinsfile.groovy (opens new window) for the full file.

Both the Maven and JDK version have to be specified for the build.

The referenced names (JDK8 and maven3) have to point to a corresponding configuration in Manage Jenkins -> Global Tool Configuration, as seen in the example below. 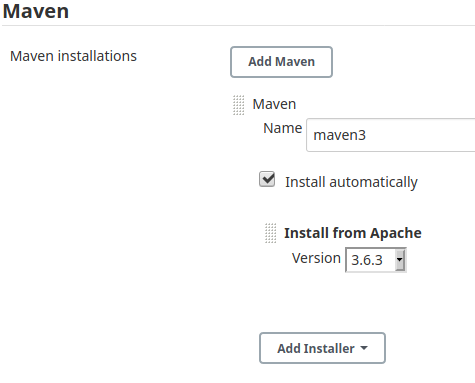 # Checkout and Setting a Flag

The purpose of this step is to checkout the current commit, to check if the last commit was done by jSparrow and to set a flag if that has been the case.

A declarative pipeline automatically creates a checkout stage by default. To avoid that, we use the option skipDefaultCheckout true and create our own checkout stage.

In order to avoid endless build loops, a flag (JSPARROW_FLAG) is set to false whenever the current commit has been done by jSparrow. In this example, the flag is set whenever the commit message contains [jSparrow].

This step can be split into three main parts:

# Whether or Not to Trigger jSparrow

By default, all conditions within a when directive (opens new window) must be true in order for the stage to be executed.

The purpose of this when condition is to make sure that the current branch is a feature branch and that the flag is still true.

In this step we make use of the previously defined JSPARROW_LICENSE (see License Key as Secret Text) and JSPARROW_CONFIG (see jSparrow Config File).

The configFileProvider plugin (opens new window) is used to make the JSPARROW_CONFIG file available to the build in a local path. Here, the config file is placed into /tmp/jsparrow.yml. This path is then passed to the jSparrow execution.

All that remains is to call the jsparrow:refactor goal with the two resouces.

# Pushing the Changes to Git

After running jSparrow, the changes have to be committed and pushed to the original repository, in order for the changes to be persisted.

As long as the GitPublisher plugin does not support pushing (see JENKINS-28335 (opens new window)), a workaround is required for pushing changes. The SSH Agent plugin (opens new window) can make use of already defined SSH credentials and will therefore be used in this example.

In the end, the pipeline should be triggered whenever both of the following conditions are met:

The screenshot below shows an example of a feature branch commit triggering jSparrow, followed by a [jSparrow] commit, which skips the jSparrow step.